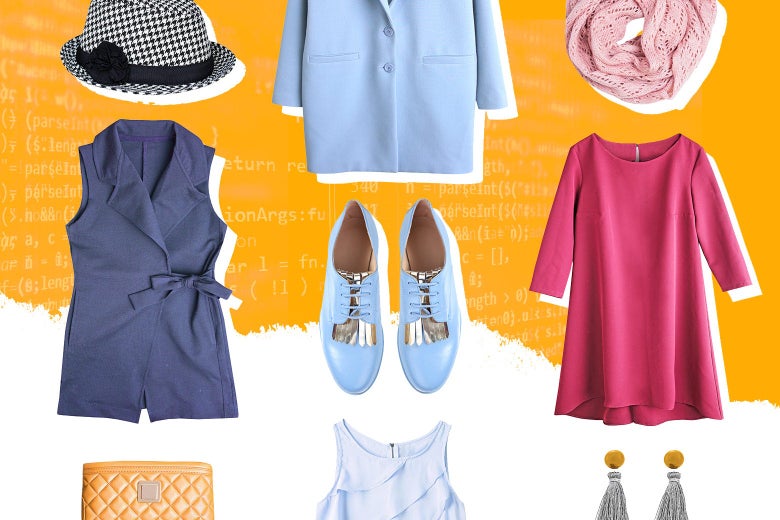 Stitch Fix, a $2 billion clothing startup, prides itself on algorithms. Founded in 2011 by Katrina Lake, the company quizzes customers on their fashion tastes and wardrobe needs, then selects five items to mail to them. Keep what you want, pack up and return the rest, leaving detailed feedback on why it didn’t work out—the more data, the better, to help Stitch Fix get to the heart of what you want to wear. A glowing article in Wired published earlier this week explains how the company is hoovering up astrophysicists to help refine its methods for selecting clothing for customers; another from September outlined an internal “Clueless closet” feature that helps stylists create outfit suggestions that are mailed with the boxes. Quartz reported in May on a data-gathering feature that asks customers to swipe on clothes the way they would potential Tinder matches, all in an effort to ship people specific dresses and booties and whatnot they have a higher chance of buying.

This is all weird to read about, because as a Stitch Fix customer, I have found the experience less one of receiving magically tailored suggestions and more one of getting a box of kind of random stuff. Over the course of 11 orders between 2014 and last month—55 items total—I’ve kept just seven things. One is a plaid shirt that I’m wearing as I type this, and another is a cute “jardigan” that I wouldn’t have picked out for myself but nonetheless love. But in other instances, my decision to keep stuff was motivated by the fact that if you buy nothing, you forfeit an up-front $20 fee, which can otherwise go toward purchasing something from the box. Perhaps most relevant is what I haven’t kept, clothes that are aggressively not for me: shirts that billow out around my body despite my request for help finding clothes that fit my somewhat specific shape; bold prints, despite my affinity for solid neutrals. While I’ve kept coming back to see if things have finally improved (motivated by bizarrely good press), I have come to accept that Stitch Fix is not ready to home in on my soul.

What Stitch Fix delivers is good enough to keep me coming back but not to satisfy me.

It’s not exactly that the algorithms are crap, because Stitch Fix does not in fact leave the styling to algorithms—at least, not all of it. Each box is curated by a human being, to whom the algorithms offer up a selection of options for each user (far from hiding this, the promise of having a personal stylist is promoted as a main selling point to customers). The number of options is sometimes fewer than 10, one stylist told Anne Helen Petersen of BuzzFeed News for a nuanced feature on the company in 2015. But that’s because of stock issues, not the algorithm’s ability to nail things. The clothing fed into the algorithm is limited in another way: It is in and of itself a particular style. Like any traditional store, Stitch Fix has a vibe. It’s vibe tends toward clothes that would work well in a corporate job interview; even when I say I’m looking for things to wear on dates, I get clothes that are fairly conservative. (Petersen quoted one customer as saying that the company is always trying “to dress me like a small-town secretary at a utility company.”) That’s apparent when I’m clicking through the style swipe feature, presumably getting a look at all the offerings.

In a tell that this algorithm-low-wage-worker tag team isn’t the ultimate solution to getting dressed, Stitch Fix is expanding beyond its original model. This summer, it started promoting a small collection by influencer Katie Sturino, with the directive for potential customers to request specific pieces from a stylist. The last time I ordered a box, I was given the option to add on basic items like camisoles and underwear, choosing from a small selection. Stitch Fix is also testing out a feature called “Shop Your Looks.” MarketWatch reports that on an earnings call, founder Lake said “Shop Your Looks” will be “hyper curated and personalized to every client.” Still, it will basically function like a store, with customers picking out clothes for themselves. Plenty of other online stores, from Amazon to Madewell, already serve up clothes that are recommended for specific users and items that pair with something else you’re already looking at.

Stitch Fix is essentially selling its astrophysicist-filled data science team as part of the product, making this all look a bit fancier than it really is. “Data science isn’t woven into our culture; it is our culture,” Lake, the company’s founder, wrote in the Harvard Business Review last year. It also places an interesting weight on just how important the pursuit of selling shirts is. In Wired, Arielle Pardes describes a growing group of “astrophysicist deserters” who are gathering at Stitch Fix and other Silicon Valley companies to try to sell us more stuff.

While they surely bring value to these companies, their presence also offers an opportunity for science washing: overselling the usefulness of a scientific concept to make a product more appealing and special. The recent Wired article notes that the Stitch Fix data science team uses “something called eigenvector decomposition, a concept from quantum mechanics, to tease apart the overlapping ‘notes’ in an individual’s style.” As many people pointed out on Twitter, eigenvector decomposition is just a regular old linear algebra technique. It’s like saying that a lotion with sunscreen prevents wrinkles, or even that forgoing a straw is an ecofriendly thing to do: not wrong, but also not revolutionary.

Ultimately, my experience in using Stitch Fix feels neither like having a personal shopper, nor like getting dressed with a magical science machine, but like pulling a lever on a slot machine that makes the odds look better than they are. For me, what Stitch Fix delivers is good enough to keep me coming back but not to satisfy me. I’m actually sort of horrified to tally up how much time and money I’ve spent engaging with Stitch Fix when the payoff has been so small for me. Which is to say, the experience is like that of buying anything else that promises to finally make you pulled together and beautiful.