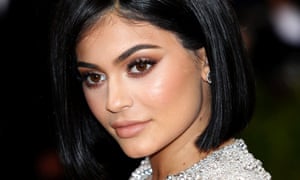 Kylie Jenner, the youngest member of the Kardashian-Jenner American reality TV family, has become the world’s youngest billionaire at the age of just 21.

Jenner, who grew up under the watch of TV cameras filming Keeping Up with the Kardashians, was on Tuesday admitted to the “nine-zero” fortune club by Forbes. The business magazine ranked Jenner as the world’s 2,057th richest person. She became a billionaire two years younger than the Facebook co-founder Mark Zuckerberg, who took the title at the age of 23 in 2008.

“I didn’t expect anything. I did not foresee the future,” Jenner said in an interview with Forbes. “But [the recognition] feels really good. That’s a nice pat on the back.”

Jenner’s fortune comes from Kylie Cosmetics, the makeup company she runs largely from her iPhone, with the help of her mother Kris. Forbes estimated that the cosmetics company, which is 100%-owned by Jenner, made $360m (£274m) in sales last year.

Forbes’s estimate of Jenner’s wealth comes in its annual ranking of the world’s billionaires. Its research found that the total number of billionaires had declined over the past year from 2,208 to 2,153.

The world’s richest person remains the Amazon founder and chief executive Jeff Bezos with a $131bn fortune, up $19bn on 2018.

Most of Kylie Cosmetics’ sales come directly from Jenner’s social media accounts. She has 128 million followers on Instagram (three-quarters of whom are estimated to be aged 18-24). She has one of the most viewed accounts on Snapchat, and is followed by 26.7 million on Twitter. Such is the weight of her influence that when she tweeted that she was “sooo over”Snapchat last year, more than $1bn was wiped off the company’s stock market value.

Sales are driven higher by Jenner sparking fomo (fear of missing out) among her fans with warnings that collections are in very limited quantities. Her initial stock of $29 “lip kits” – matching lipstick and lip liner – sold out in less than a minute, crashing the website.

Jenner, who has been in the public eye since she made her debut on Keeping Up With The Kardashians a decade ago when she was 10, said: “Social media is an amazing platform. I have such easy access to my fans and my customers.”

The business, which Jenner founded in 2015, employs just seven full-time staff. It is almost totally outsourced. Jenner comes up with ideas for styles but the products are made by Seed Beauty, a private-label producer

Orders and sales are outsourced to Shopify, a Canadian online company that also runs shops for Drake and Justin Bieber.

Jenner also does not have to worry much about the business’s finances or the day-to-day management of her 12 staff (including five part-time). Those matters are outsourced to her mom or “momager” Kris Jenner, who manages all her children’s financial operations – in return for a 10% cut.

Jenner, who used her reality TV exposure to secure modelling work with brands such as Topshop, said she had struggled to decide what to do with her life. Then her thoughts turned to her most talked about feature: her lips.

She trademarked the phrase “Kylie Lip Kits … for the perfect pout” two years before setting up her company with $250,000 of money she had made through modelling and reality TV work.

“Ever since I was probably 15 I’ve been obsessed with lipstick. I could never find a lip liner and a lipstick that were the perfect match. So that’s where I thought of the idea that I wanted to create my own product,” Jenner said.

Jenner said she was scared that sales might not take off when the website first launched. “I kept calling my mom, saying: ‘Mom, I’m so scared. Do you think it’s going to sell?’ Because I put all my money upfront. You know, it’s all my money. I put everything into this.”

The total combined wealth of the world’s billionaires is $8.7tn – more than three times the gross domestic product (GDP) of the UK – down from $9.1tnlast year.

Forbes calculated that Bezos’s fortune, which is mostly held in Amazonshares, increased by $19bn over the past year due mostly to the increase in its share price. Bill Gates, co-founder of Microsoft took second-place, with a $96.5bn fortune, up from $90bn last year. Warren Buffett is the third-richest with $82.5bn, followed by France’s richest man Bernard Arnault, who has an estimated $76bn fortune.

Zuckerberg fell from the 5th-richest person on earth to the 8th as his fortune declined from $71bn to $62.3bn due to the drop in Facebook’s share price due to the Cambridge Analytica data breach scandal.

Donald Trump’s “net worth” is unchanged at $3.1bn, but the US president rises from the 766th to the 715th richest person on earth as other billionaires have seen their fortunes fall.

More than 50 UK-based billionaires are on the list including Britain’s richest man Sir Jim Ratcliffe, who is leaving the UK for tax-free Monaco, and Denise Coates, the online betting boss who paid herself £265m in 2017.

The shadow chancellor, John McDonnell, said: “This is another reminder of the enormous wealth that, under the Tories, has been hoarded by a tiny number – tearing at the social fabric that once held us all together. It’s shocking that there are 54 UK billionaires on the Forbes billionaires list while rough sleeping continues to rise and Universal Credit causes hardship and misery.”