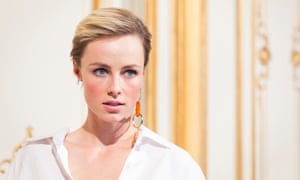 Fashion is, as an industry, the world’s second largest polluter. It clearly has a problem with environmentalism and, as a model, I am part of that. When I scroll through Instagram, I’m shocked to see editors and tastemakers broadcasting their successful, glamorous lives through images on private jets. I can’t tell you what the solution to fashion’s environmental problem is, but I’m sure private air travel is not part of it.

I’m aware I am complicit – I have spent a significant part of the last decade on a plane. There was a time when I was travelling so much, my accountants were concerned I would no longer be considered a UK resident; a time when I would fly from London to New York and back in a day, like it was the most normal thing in the world. Ten years ago, it was a little easier to pretend the world would be all right. Today, I find my carbon footprint horrifying.

More stuff is the last thing the world needs

Is it possible to square my career as a model with my concern about our impending climate catastrophe? It’s a question I often ask myself. After all, my success as a model results from my ability to sell more things to more people – and more stuff is the last thing the world needs.

We are in the midst of a month in which luxury fashion houses will spend millions on a show that lasts 10 minutes, with journalists, models, influencers and buyers flying in from around the world. They will show clothes that will be relevant for three or six months, after which the cycle will repeat: a new season, new clothes, more stuff to be bought by more people.

This seasonality seems increasingly absurd to me. Fashion is a spectacle, and the fantasy of a show can be beguiling. But more and more often, I find myself standing backstage and wondering if it is really time for a new collection already? Weren’t we doing this just a few weeks ago?

The luxury sector feels out of step in other ways, too. Recently, a journalist friend was invited to interview a Japanese designer. Rather than do it over Skype, they were flown to Tokyo to meet said designer in person, over lunch. Brands compete to show their collections in distant locations with complex sets that are used only once. Last year, Chanel enraged environmentalists by digging up oak trees and replanting them, temporarily, in the Grand Palais in Paris.

The world is changing, but fashion is not changing with it. An industry that has long responded to youth movements is failing to respond to the greatest one in decades: climate concern. It continues to target a consumer who can be seduced by images of excess – but what happens when that consumer rejects excess? When young climate strikers such as Greta Thunberg grow up, will they really become luxury customers?

Among models, I know some who have turned down lucrative jobs with brands whose environmental and manufacturing track records do not stand up to scrutiny. While I applaud their integrity, the solution lies not in the actions of an individual model – when one turns down a job, another takes her place after all – but in government action. The closest thing high fashion has to government is the conglomerates that own luxury brands. It will be interesting to see how, over the coming years, LVMH and Kering – owners of Louis Vuitton, Gucci, Christian Dior, Balenciaga – restructure their business in a way that pays more heed to our impending disaster.

I would love people to buy less. Even if that would put me out of a job

There are glimmers of hope: a few photographers now demand a plastic-free set. Some of Prada’s iconic nylon goods will be made using Econyl – created from recycled plastic and textile waste – and a percentage of sales will go to sustainability projects. I would be proud to work with brands that shoot on a Norfolk beach, rather than flying a European crew to Mexico. I would love there to be more transparency on clothing labels. I would love the fashion industry to produce less and invest in more sustainable manufacturing methods and materials. Mostly, I would love people to buy less. Even if that would put me out of a job.