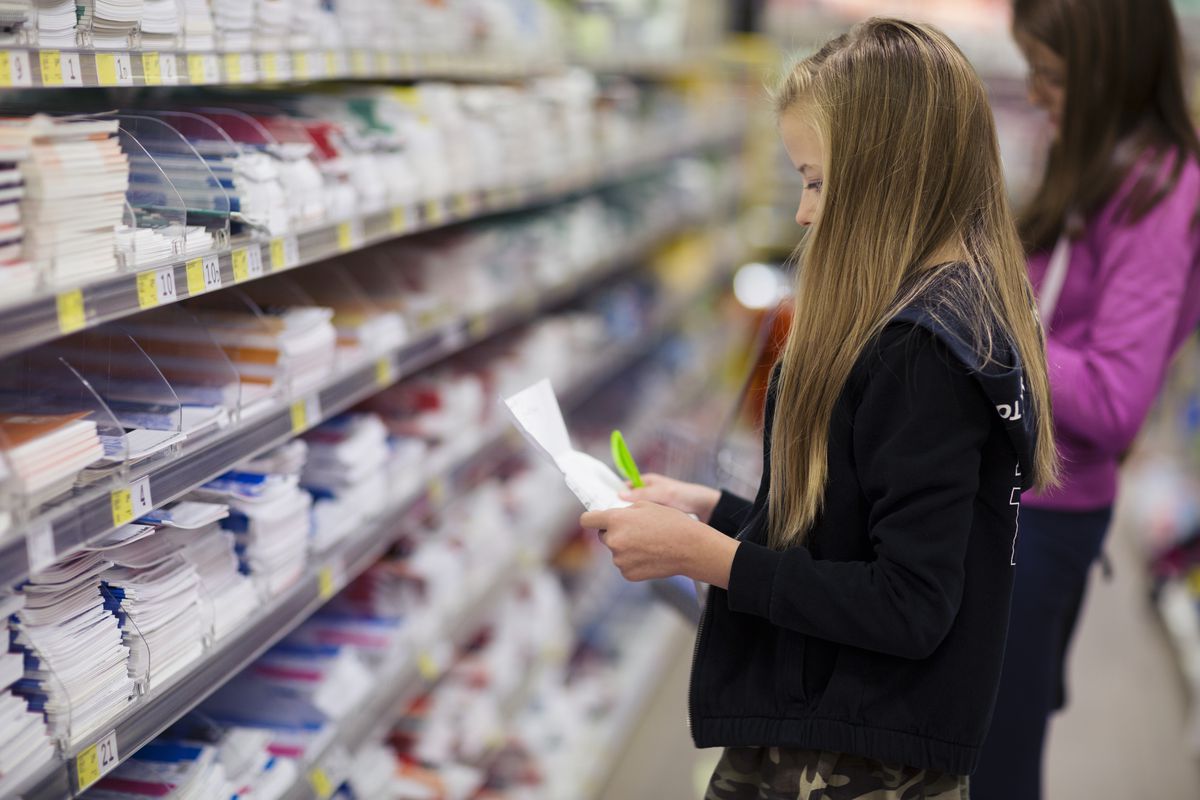 Ah, September! ’Tis the season that shatters the holidays as the most wonderful time of the year: back-to-school. Parents of children K-8, rejoice! But while adults have long exulted in the notion that summer’s end means their kids are once again out of their dang hair, they’ve long bemoaned the Back-to-School Shopping Industrial Complex, too.

Big-box stores like Target and Walmart, meanwhile, are utilizing tools that essentially take the shopping out of shopping. Target’s School List Assist and Walmart’s Teacher’s Shelf are two online services that invite parents to search by school for their kids’ classroom-specific school supplies lists. One-click shopping cuts to the chase even more: List items can be added right to shoppers’ carts for delivery or curbside pickup, likening the service to online registries for kids. Target’s FAQ shares that School List Assist hosts almost 2 million class lists on Target.com. Target declined to comment on specific numbers related to participating schools, teachers, and shoppers, as well as whether this figure reflects 2 million classrooms to date since the program launched in 2015 or 2 million classrooms hosted in 2019 alone. A request to Walmart for comment went unanswered by the time of publication.

These offerings — touting convenience and simplicity — are the product of partnerships with TeacherLists, a school supply list platform founded in 2012 by School Family Media, a marketing services provider that works with “family-focused retailers and consumer brands” to reach parents and teachers. Back-to-school shopping is a “dreaded chore,” says TeacherLists. It’s so notoriously stressful, in fact, that TeacherLists created Facebook-, Twitter-, Instagram-, and Pinterest-ready cartoons, featuring a bored genie, a shell-shocked mom who appears to have seen things, a sunglasses-wearing character who can score purple pocket folders on the black market, and shopaholic children running amok with a cart and no regard for their PO’d parent. TeacherLists promises, however, that there’s another way.

“What we were trying to do was make the back-to-school list easier for parents to find and use, and do that by taking it from a paper-based process to a digital-based process,” School Family Media CEO Charles Field tells Vox. A TeacherLists marketing video shows the labor and woe bedeviling the days of yore: A school administrator collects a stack of classroom lists, posts each individual list within the stack online, a mom waits for the list, prints the list, forgets the list, drops her head in sorrow over the list, and leaves the store empty-handed, defeated, and, y’know … listless. TeacherLists’ digital-based process enables direct uploads from teachers, mobile alerts for parents, a checklist format for in-store shopping, and direct connections to online outposts of partnered retailers like Target, Walmart, Amazon, Staples, and Office Depot/OfficeMax, mainstays of the back-to-school shopping universe.

In July, TeacherLists announced it had passed 1 million supply lists this year; Field estimates that this number will reach 1.7 million classrooms by the end of this season.

The draw of simplifying back-to-school shopping for parents can’t be emphasized enough. According to data shared by marketing intelligence firm MiQ, American shoppers make around 16 trips to stores for back-to-school stuff between July and September, and they spend over $500 per family. “Price, product, and convenience are analogous to reading, writing, and arithmetic,” reports research and consultancy network Deloitte’s 2019 back-to-school survey results. Reads one of the report’s quoted parent testimonials, “If I have to search more than 10 seconds I move on to another store.”

TeacherLists vows to save parents time; it also hopes to save parents money. Though TeacherLists doesn’t offer a price comparison function, shoppers can do that by clicking the different retailer button options that appear alongside class lists on TeacherLists’ site. “What we find is a lot of our users will click on multiple retail buttons and then decide which ones to purchase through,” says Field. “I’m a parent and I did that myself.”

The tool itself is free, which is to say that parents pay the retailers’ list prices for products, with no fee added to use the list service. Retailers who partner with TeacherLists, like Target and Walmart, pay TeacherLists a fee to be part of the program. The partnership involves a significant amount of labor on TeacherLists’ part: of gathering, cleaning, and digitizing classroom lists before then matching classroom lists with retailers’ and brands’ product listings. (Yes, it is a business dedicated to simplifying list generation that is also governed by lists!)

TeacherLists also does the work of interpreting the sometimes-not-so-straightforward school requests into action items. Field gives the example of a very Generation Alpha school supply requirement that now appears frequently on lists: earbuds in a Ziploc baggie with the student’s name written on it in Sharpie. The only item needed in this specific scenario is the set of earbuds, not the Ziploc and not the Sharpie, and TeacherLists’ job is to parse this request. “We do all the work that makes this possible on the backend,” says Field.

On the school side, TeacherLists promises an efficient, streamlined, auto-distributed process, a tremendous selling point on the district level in particular. Metro Nashville Public Schools in Tennessee encompasses 168 public and charter schools, and is one example of a massive school district that opted to consolidate the school list process through TeacherLists. “The district used to manage these lists by asking every single school to provide them with a list,” says Field. “Now they use our platform to manage all of their lists.” As of 2017, MNPS served close to 88,000 students.

“[C]ompanies across the industrial spectrum are looking for ways to make their customers’ lives easier,” says trends expert and director of the Avant-Guide Institute Daniel Levine. “Prevailing wisdom among businesspeople is that we are living in the busiest times in human history. And the world continues to move ever faster.” Companies, in effect, must keep up, and back-to-school is no exception.

It’s a sizable market to capture. There are 54 million school-aged kids in 29 million households in the US, reports Deloitte, with families projected to spend $27.8 billion during the 2019 back-to-school season. Sixty percent of Deloitte’s survey respondents planned to use mobile for their back-to-school shopping needs — including price research, coupon collection, and purchase completion — up from 53 percent in 2018, making them prime candidates for TeacherLists’ mobile function on three different fronts. So too does this staggering stat: Eighty-eight percent of shoppers surveyed by Deloitte prefer to shop in big-box stores.

The overwhelming popularity of “buy online pickup in-store” — BOPIS, in retail speak — may be one reason why. Nearly 70 percent of American shoppers use BOPIS, reports Business Insider, adding that 85 percent of those shoppers have also made in-store purchases during BOPIS trips, making BOPIS a potential “driver of additional sales.” Its hallmark (much like what parents seek from back-to-school shopping) is convenience.

On the back-to-school front, amenities-on-top-of-amenities like Target’s School List Assist plus curbside pickup get shoppers to the store, but kids seem to get parents inside. “Our research shows that the big players are catering more to what the kids want, not what the school is telling them to get,” says Allen Adamson, co-founder of marketing and product consultancy group Metaforce and adjunct professor at NYU’s Stern School of Business. “What the schools are telling them to get are ‘table stakes,’” or, in nonpoker terms, the bare minimum required to stay in the game. “The market opportunities are on the, ‘Mom, can I get new [insert backpack brand, sneaker brand, or clothing brand here] for school this year? All my friends have them.’”

Of course, these programs are yet another way that superstores box out small businesses, with offerings of ease and convenience (to speak nothing of low, low prices) disincentivizing consumers from shopping local. And there are a lot of reasons to be concerned about this phenomenon in the broad. As Stacy Mitchell, co-director of the Institute for Local Self-Reliance, writes for the Nation:

Economists have recently begun to document a link between corporate concentration and rising inequality. Dominant companies, they’re finding, are funneling the spoils to a small number of people at the top. And by reducing the number of their competitors, these companies are also making it harder for workers to get a fair wage and for producers to get a fair price. […] Between 2005 and 2015, the number of small retailers fell by 85,000, a drop of 21 percent relative to population.

It’s near impossible for small businesses to truly compete with the likes of Target, Walmart, and Amazon. As far as TeacherLists goes, though, independent retailers may be able to harness the same tools if they can afford it. “There’s nothing to stop a smaller store from working with us from the technology solution perspective,” says Field, adding that their app can be embedded on any store’s site, and local stores have participated by printing classroom lists collected and provided by TeacherLists. “It all depends on how much local school business can do for it to make sense.” TeacherLists declined to comment on how much it costs to be a part of their program.

Is anything lost for parents or kids by forgoing back-to-school shopping as an outing and transforming it into a quick, clickable task? “School supplies, especially those recommended by teachers, are not emotional purchases,” says trends analyst Levine. “They are commodities. [M]ost busy parents are happy to dispatch with this chore in the easiest ways possible.”