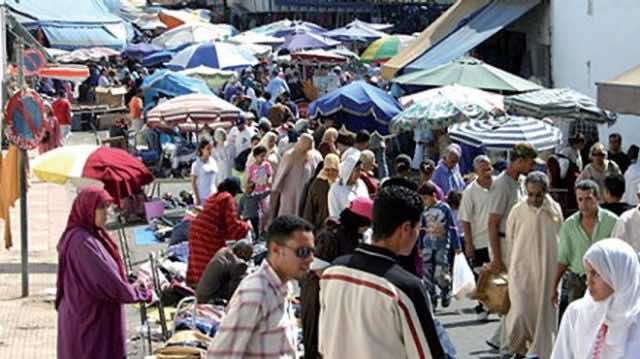 Rabat – Used to the cool supermarkets and boutique delis of London, Oxford and Dorset, I found shopping in the markets of Derb Sultan quite a shock. I regularly set out to buy tomatoes and parsley and came back empty-handed, overwhelmed by the noise and confusion, and struck dumb by the shouts of the vendors. The embarrassment of coming home having bought nothing and having to tell my husband I had, again, failed in a simple task due simply to ingrained Europeanness and timidity was too much. I found a supermarket through a quick Google search and began to do my shopping at Acima. A two-hour round trip on foot.

Having always been a reasonably adventurous person, I couldn’t stand having been beaten by Moroccan markets. I woke up one morning and decided that today I would go out and buy something, even if it was just one clove of garlic. Determined, I put on my shoes, picked up my raffia shopping bag and headed for the door. “Acima?” my husband asked as he saw me walk past his office. I nodded, I was not going to tempt fate by telling him I was going to conquer the market place.

Setting off, with a steely resolve down the road that leads from the butchers’ market next to our flat, towards the covered spice and olive market, I dodged the blankets and wheeled carts, laden with vegetables, fruit, cleaning equipment, herbs, and even turtles. At this point, feeling confident and optimistic, I strode into melee.

As I passed, the vendors screamed prices and offers. “Ashraaa, ashraa” they cried continuously, waving their wares in the faces of shoppers as they try to find a path through the crowds. Struggling to find a gap to negotiate the crowd of shoppers and the ever-moving hand carts, I looked desperately around for an escape route but was not going to give up that quickly.

Ducking under the umbrella of a wheeled pineapple cart, I took a shortcut into the covered market. The distinctive smell of chicken feces permeated the air but as I turned down a second, shaded, corridor, the smell of olives and pickled vegetables took over. The sheer choice was overwhelming. Stalls upon stalls were covered in olives of different colors in different marinades and the proprietor of every stall stared down at me, offering tasters, greetings, and cries of “Madame, madame, shoofi, shoofi” look, look!

I considered trying to purchase MAD 5 of mixed olives, turned to look at the nearest vendor who immediately lurched forward “Oui, oui, Madame, Madame, Bonjour, Hello!” Suddenly, the words in French, English or any other language seemed to have disappeared from my head. I felt as though I had shrunk, like Alice in Wonderland, to the size of a mushroom. I felt that my voice wouldn’t reach the ears of the dozens of olive purveyors staring down at me. Chickening out, I thought perhaps some onions would be a better idea.

Exiting the market through a side gate, I turned towards the vegetable vendors in a neighboring street. Here there were women’s voices calling the prices; offering shelled peas, parsley, carrots, and every type of herb. Perhaps this would be easier, I paused to consider some onions on a cart presided over by a kindly looking old woman, but, just as I opened my mouth to speak, a donkey dragging a cart of potatoes, fresh from the blad (countryside), almost ran me down. Swerving, I found myself next to a stall selling plastic kitchen items.

“Bonjour, ca va?” said a voice in my ear. Turning, I saw an unknown man, who I presumed was the proprietor. I smiled and carried on walking. The man, who was not the plastic bucket vendor but had other intentions, followed in hot pursuit. “Mademoiselle, ca va?” he said, louder this time, reaching out for my arm. Jerking it away, I sped towards the end of the road, it was quieter, there were fewer people. I paused to breathe, then hurried home, defeated.

Being defeated by a market was just absurd, I told myself sharply. So the next day, I put on my fiercest face and set out to try again. I negotiated the moving stalls, ignored the shouts, and even managed to smile at a neighbor and say “Labass?” how are you? Finally, in the relative tranquility of the covered market, I chose a stall at random and approached. Immediately, the proprietor, a tall man with a white beard, sprang to his feet “Bonjour, oui, bonjour, oui?” he cried. I stood my ground and quietly asked “Afuk juj dirham touma”, MAD 2 of garlic please. The transaction was a success, I walked away from the stall clutching my two small bulbs of garlic and feeling extremely proud of myself.

Thrilled with my success, and feeling as though I could manage any transaction now, I walked home, head held high, and boastfully showed my treasure to my husband as soon as I got through the door.  As time went on I became bolder and bolder. It started with the odd spice, but by the end of a month, I bought vegetables, went to the butcher, and even went so far as replacing our broken tagine.

However, pride comes before a fall, and it was not long before I realized that the vegetable vendors, spice purveyors, and even the man who sells tagines had been taking me for a ride. One morning, having checked my purse, I realized that I didn’t have enough cash for my outing, so I asked my husband to provide. He gave me MAD 20, “that’s not enough,” I said, rather irritated. “I thought you were going to buy vegetables,” he responded questioningly. “Why do you need so much money?”

A trip around the market with my husband showed me the error of my ways. While he could buy several onions, tomatoes, potatoes, and parsley for under MAD 15, I had been spending double that amount on half the produce. That evening, more than a little downcast, I decided that the only way forward was the supermarket where the prices are fixed. My husband, however, had other ideas. He advised haggling. Tourists generally kept to Habous, on the other side of the school. Knowing that whatever I wore, my face and voice would always give me away as a ‘tourist,’ I had to make it clear that I was not to be taken advantage of.

Once more into the breach! The next day, having cut through the covered market to the vegetable stalls on the other side, I filled a tub with vegetables and then handed it over to the vendor, a short woman wearing a tea towel as a headscarf who smiled with blackened teeth. She looked me up and down, as though weighing up what she thought I could afford. Taking in the sunglasses and the fitflops, she asked for MAD 35. No, too expensive. I turned to leave, abandoning the vegetables, my face set. “Humstache,” fifteen, she called after me. I accepted. The first try had been a success.

The longer I lived in the area, the easier it became. The vegetable vendors and stall proprietors started to recognize me and, I think, appreciated or laughed at my slightly underwhelming efforts to speak in Darija. I became a regular at the same vegetable stall and the woman with the blackened teeth even engaged in small talk with me about the seasonal vegetables.  I started to frequent the same spice stall in the covered market, and, eventually, the proprietor even sent his daughter to our school. I successfully bought meat, and became a regular at the hanout, corner shop, across the street. While I’m sure the prices I was quoted would not be the same for my husband or any other local, they did seem to get lower and lower and, by the end of two years, I began to feel almost as though my status as a ‘tourist’ was beginning to wane.

We have since moved to Essaouira where I will absolutely not fall into old supermarket habits, despite having yesterday been charged MAD 50 for two tomatoes and a bottle of water at my local hanout.